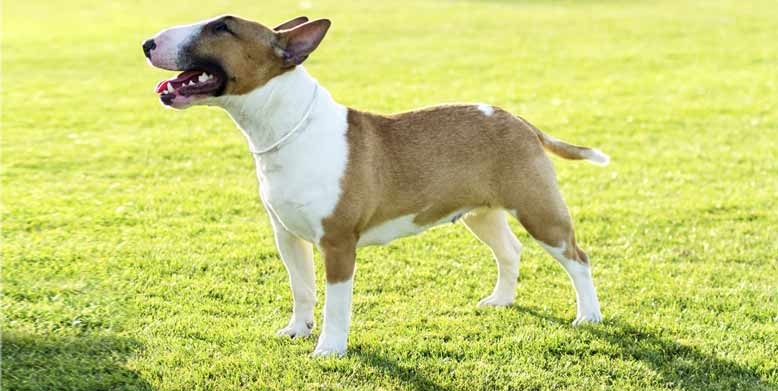 There is a mini version of everything today – mini coupers, mini golf, mini fridges, and now even dogs come in mini versions. Enter mini bull terrier!

Unlike standard bull terriers who had their roots in dog fighting, miniature bull terriers were mostly used for killing rats, which lived in multitudes in old England homes and streets. Apart from this useful functions, many people simply liked the combination of a bull terrier character traits in a smaller, more compact body.

Mini bull terriers were first shown at dog shows in 1963. However, the full standard of the breed was only defined in 1991. By then there were dozens of miniature bull terrier clubs in England and other countries.

The Miniature Bull Terrier must be strongly built, symmetrical and
active, with a keen, determined and intelligent expression.

Mini bull terrier jaw is strong and muscular. On the whole, the dog almost looks “square”, with wide shoulders, shorter legs and shorter body. A well-bred and well-raised miniature bull terrier has to be sturdy and bulky, but not overweight. 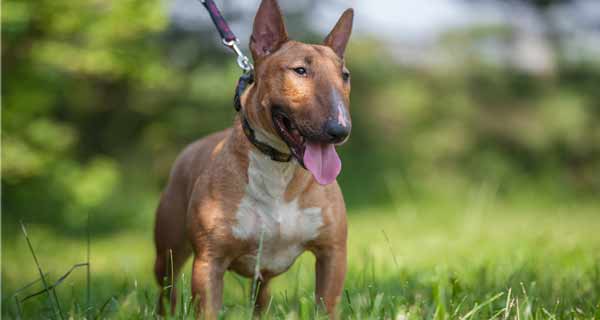 While standard bull terrier can reach 20-23 inch in height and weigh around 45-65 pounds, a miniature bull terrier is usually anywhere between 10 to 14 inches tall and can weigh between 24 to 34 pounds.

According to the AKC, the miniature bull terrier’s eyes should be as dark as possible, and deeply sunken, to give the bull terrier a piercing and keen expression. Their neck should be muscular and long, without loose skin. 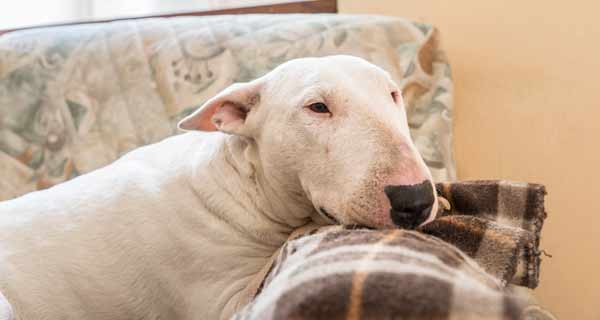 Mini bull terriers, like standard bull terriers, are an extremely people-orientated breed. They adore their owner and their family, and are great pets to have as companions. Despite the rumors, they are extremely amiable and do not have aggression towards people.

However, just like the standard bull terrier, mini bull terriers are not easy dogs to have. They are very stubborn and strong-willed, and need an owner that will be able to keep them in line.

With a dog like min bull terrier, you will have to invest a lot of time, effort and patience in training and teaching it good manners around other people and animals. Only then can you expect consistently good behaviour from your mini bull terrier.

Although mini bull terriers do not harbor any aggression towards people, they are powerful dogs and can become dangerous if there are any flaws in their personality (aggressiveness, over-excitability, lack of socialisation, etc) that aren’t dealt with.

Mini bull terriers can often be aggressive to other animals, especially if they have not been properly socialised as puppies. A healthy, well-raised bull terrier will hardly ever attack first, but will definitely fearlessly protect himself (and you) if attacked by another dog, even a much larger one.

Just like their larger counterparts, mini bullies are fight machines and can cause a lot of damage to any other animal. This is another reason to invest time into training and socialising your mini. You don’t want your mini bull terrier to terrorise neighbourhood dogs, cats and squirrels, and definitely not people!

A slight difference between mini bull terrier personality and that of the standard bull terrier is that mini bull terriers can be slightly more excitable and less obedient than larger dogs, who normally have somewhat calmer demeanour. ( Although both can still be considered the clowns of the dog world!)

Just like standard bull terriers, mini bullies do not do well when left alone. They are so attached to their family that they can easily become destructive and develop psychological issues if left alone for a long time.

They can also be jealous and possessive of their owner. Some bull terriers hate it when their owner plays with another dog or other type of pets in front of the bull terrier. If you are getting a miniature bull terrier, be prepared to be somewhat “possessed” by them.

Miniature bull terriers, just like standard bull terriers, are very intelligent dogs. They are extremely perceptive, capable of quick decision making and have an excellent memory. You can train your mini bull terrier to do practically anything.

However, they aren’t the easiest dogs to train. This is not because they don’t understand what you want from them. They understand you perfectly. They just often don’t want to do whatever it is you want to do them.

Despite their almost maniacal love for their owners, mini bull terriers are highly opinionated dogs and tend to follow their own instincts and desires more so than their owner’s commands.

Will bull terrier, you will always have to persuade them to follow you – by being a strong, confident owner, and, of course, by offering treats you bull terrier cannot refuse.

Although bull terriers are excellent fighters,  you likely won’t be able to train them to be your personal guard. If you try to train your bull terrier any commands that involve attacking other people or displaying threatening behaviour towards others, you will only end up increasing your bull terrier’s overall aggression towards everyone, including you and your family.

Bull terriers have never been and should not be guard dogs. It isn’t in their temperament, and I wouldn’t recommend even thinking of using them as such.

Both mini bull terriers and standard bull terriers are excellent family pets and are generally safe for families with children. Moreover, they normally thrive in such families, because they love active households where something is happening all the time, and we know how kids are just so good into turning your home into such a household.

However, mini bull terriers (and standard bull terriers) may not be the ideal pets for families with very young children. Even though they love children and would never intentionally hurt a child, they are still massive, muscular, heavy dogs and they love to play rough.

If a bull terrier hits a child while running at the top of its speed, it could end up hurting the child because of pure muscle mass. Despite being very smart, a bull terrier is a very rough playing dog. So keep that in mind if you have young children and considering getting a mini. Maybe give it a couple years.

All in all, both standard and miniature bull terrier is a great dog and wonderful family pet. They are definitely not dogs for everyone, but if you are willing to put a lot of effort and time into training and raising your bull terrier well, they will be a lovely dog to have, regardless of the size.