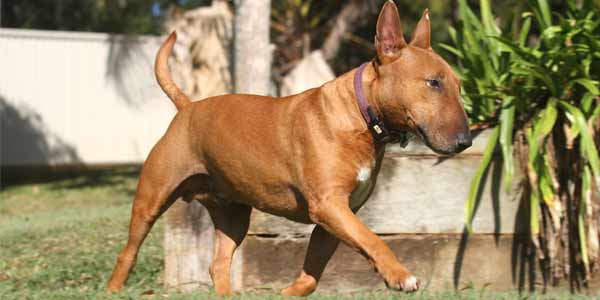 Let’s talk about the English bull terrier temperament. What are these often misunderstood and mis-labelled dogs really like?

Are they the aggressive monsters always ready to kill, as some people think? Are they fighting dogs at heart, blood thirsty and thriving in situations of conflict and violence? Can you raise a bull terrier to be your personal weapon?

Or are they loving, loyal and intelligent dogs that have endured decades of bad reputation due to overall human confusion about their nature and a few incidents (of which English bull terriers weren’t even a part of?).

English Bull terriers really do have a bad reputation. Since they were originally bred to fight other dogs and exploited in such cruel activities for centuries, a lot of people believe they are intrinsically vicious and dangerous.

English Bull terrier appearance doesn’t help the matters either. Sturdy, bulky, powerful-looking dogs with shark-shaped head and small eyes – they just have to be evil, don’t they?

But any person that knows English bull terriers closely will tell you it’s far from truth. Bull terriers are not any more vicious or aggressive than any other breed. Yes they are very powerful, strong dogs. They are born power athletes of the dog world. But they are not evil. In fact, they are quite the opposite.

English Bull terriers were specifically bred NOT to be aggressive towards people. This is because during dog fights, people had to be able to break the most heated fights at any moment. If a bull terrier was aggressive towards the person trying to break the fight (responded by snarling or biting the person) the dog was not considered suitable for further work and / or breeding.

An English bull terrier historically has to have a “cool” mind to be able to have enough self control and not lash out on people even in the middle of a fight with another dog! These traits of self control and non-aggression towards people have been encouraged and strengthened through selection for generations and generations of English bull terriers.

This is why, contrary to the popular belief, an English bull terrier is a very patient, collected, calm and tolerant breed when it comes to people. Bull terriers are NOT aggressive towards people. They love people, especially their owners, but they are also normally very friendly with everyone. People attacks by bull terriers are actually very rare and are not any more common than other breeds. In fact, some other breeds, such as German Shepherd or doberman, are much more guilty of being aggressive and attacking people since those breeds are guard dogs and it’s in their nature to distrust people. English Bull terriers are nothing like that! They are one of the most people-centric and people-loving breed out there.

Bull terriers are very good with children, even really young ones. Patient and calm, an English bull terrier will let children do things that another breed would never tolerate, both due to their self control and calm demeanour and to their high tolerance to pain. A mentally healthy and well-raised bull terrier will never attack a person, unless there is an evident danger to the owner.

This, of course, only applies to well-raised, well-behaved dogs. An English bull terrier that hasn’t been socialised and trained, and that is not paid enough attention to, may very well be dangerous just like any other breed. Probably more so because of several factors that are specific to the bull terrier breed.

This is where some of the reputation may be somewhat true – bull terriers can be and often are aggressive towards other dogs.

This is particularly true of mature male English bull terriers who can be territorial towards other males. Bred to fight other dogs, the bull terrier’s instincts are still powerful enough to incite aggression in the situation of close contact with another dog.

Normally, in a well-behaved English bull terrier, this only happens if a bull terrier is attacked by another dog. This can be a really dangerous situation for the attacker. If the bull terrier decides to counter attack, it can be hard to persuade them to stop.

A bull terrier can easily cause serious damage to any other dog, including much larger dogs, such as German Shepherds or rottweilers.

English Bull terriers are incredibly strong dogs, and very stubborn, which can make them particularly dangerous if they do decide to attack. They also are insensitive to pain, and fighting is literally in their genes. With bull terriers, if you don’t invest enough time and effort to raise a calm, obedient dog, and socialise it with other dogs, you may very well raise a monster.

Socialisation, training and dedication to your dog is crucial – more so for English bull terrier than any other breed. Your bull terrier needs to get used to other dogs and animals (cats, squirrels in the park, etc) being in his field of vision. He or she needs to learn to play with other dogs in early puppy-hood, so that, by the time the bull terrier matures, it becomes natural for them to be surrounded by other animals.

If you don’t socialise your English bull terrier, they will be afraid of other dogs, or aggressive towards them, or both, since they simply don’t know how to behave around them. If you provide your English bull terrier plenty of opportunities to socialise from the time they are young, they will not be a danger to other dogs or terrorise neighbourhood cats etc. Instead, they will grow as a well-behaved citizen that you can take off the leash in a park and that will find friends to play with everywhere you go.

If you aren’t the type of person who will be able to dedicate time and effort into being a responsible owner and training your dog, a bull terrier isn’t the right dog for you.

English Bull terriers are one of the smartest breeds out there. Many bull terrier lovers believe it is THE smartest breed, which is, objectively, not that far from truth.

English Bull terriers are outstandingly inquisitive, learn fast, and are extremely intelligent. This also stems from their fighting past. Only the smartest dogs were able to be successful in the fighting ring. Intelligence and quick thinking in the fighting pit were traits that were highly encouraged and sought after, thus only the smartest of the dogs were allowed to breed. Nobody needed a slow-thinking bull terrier.

This is why these highly beneficial traits were passed on through generations and generations of English bull terriers, giving us the brilliant breed they are today.

English Bull terriers are a very “self possessed” and stubborn breed. Or, you could say they are just very motivated and dedicated to whatever they decided to do.

They are not a dog that will follow someone’s whims and not have its own opinion. Bull terriers always have their own opinion about everything. This doesn’t mean they always do whatever they want. This means they need a strong leader.

English Bull terriers are very persistent, even stubborn. If they want something, they can be hell-bent on it, and will try to get it, unless they get a clear command from a confident leader they respect. This is not a melancholic, lazy, unmotivated dog. Again, such character traits have been thoroughly bred out of bull terriers due to their fighting past. On the contrary, bull terriers are highly motivated, highly engaged with their surroundings, and genetically stubborn.

This, combined with their intelligence, is probably one of the first and the most important things to understand about English bull terriers. Bull terrier is a dog with a huge and incredibly strong personality.

Precisely for this reason, English bull terriers are NOT easy dogs, and they are NOT dogs for everyone. This doesn’t mean they are evil, or that they are not manageable. This just means they need their owner to be a strong, confident leader.

When it comes to an English bull terrier, you as the owner need to know exactly what you are doing. You need to be the pack leader, always. You need to be smart enough and engaged enough in your day-to-day interaction with your bull terrier for them to never even get a shadow of a doubt as to who is the leader.

Again, if you are a relaxed dog owner who wants a dog but doesn’t want to invest hours into training and directly interacting with your dog (such as playing, walking, training, taking them on errands with you, etc), you might not be the best owner for this breed.

This is another aspect of English bull terrier personality that makes them such a remarkable breed, both as family pet and as a former fighting dog.

English Bull terriers are very calm dogs in that they are hard to provoke. A healthy, well-bred and well-raised bull terrier is never nervous or frightful, and will not snap at people or other dogs randomly and unexpectedly.

In that sense, an English bull terrier is a much safer dog than, say, a dachshund or some lap breeds or toy breeds. In fact, it’s usually the smaller breeds that bite the most, including their own owners, often without much reason, due to their unstable nervous system and general meanness. You will not have that with a bull terrier.

English Bull terriers as a breed are also absolutely fearless. They are not intimidated by anything, be it other dogs, people or new situations. This is a great trait for a dog if you want it to protect you in case of a real attack, but can also make them dangerous if an English bull terrier is not raised well and becomes aggressive towards others for no reason. Fearless and insensitive to pain, an uncontrolled aggressive bull terrier can be a real danger to people (including you, your family and your children).

Despite their stubbornness and strong personality, English bull terriers is extremely loyal to their owner and their family. They are incredibly loving and affectionate dogs.

Their favorite activity is being around their family, watching and participating in whatever you are doing at the moment. They love their people, and love being a part of everything.

English Bull terriers do not do well with loneliness and shouldn’t be left alone or without interaction for long periods of time, which can make them bored, depressed, destructive and even aggressive. They need company, and also an outlet to expend their endless energy. Which takes us to:

English Bull terriers have LOTS of energy. They are not passive, dormant dogs that will sleep on your couch for hours (although they do enjoy that from time to time).

If you are a couch potato, an English bull terrier will not be a good dog for you. They are smart and energetic, and, as such, require lots of mental and physical stimulation, such as walks, games (especially rough play!), training, and general activity.

If you are a senior, or a person that prefers a night with Netflix to a night out hiking or roller-blading, you might want to reconsider getting a bull terrier. Being bored and under-exercised is not only bad for your dog – it can also quickly become dangerous for you, your family members and other people.

A neglected English bull terrier that can’t use up their energy in playing and interacting with their owner can easily become destructive, aggressive and potentially dangerous. Consider this before getting a bull terrier puppy.

In an ideal situation, an adult English bull terrier needs about an hour walk in the morning, half an hour during the day and another hour in the evening. If you provide them with that amount of exercise, you will get a happy, healthy, completely non-destructive dog. But do you have this much time to give to your dog? If you do, maybe a bull terrier is for you.